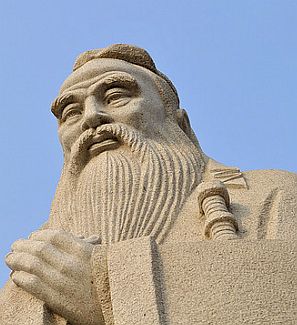 Confucius (孔子 -kǒngzǐ-, literally “Master Kong”) (September 28, 551 B.C. - 479 BC) was a Chinese thinker, the creator of Confucianism, and one of the most influential figures in Chinese history. The teachings of Confucius have survived thanks to his {Anaclets}, which contain some of the discussions he had with his disciples.

Confucius was born in the town of Qufu in the former state of Lu, now part of the Shandong Province, in the Kong family, a noble family of landowners. His father died when Confucius was three years old. Despite this, Confucius was given an excellent education.

While still a young man, he worked for the state of Lu. His first job was in the state granaries and he ended up rising to the position of Justice Minister. He resigned from this post many years later, as he did not agree with the Duke’s policies.

The Great Together by Traversees

Confucius was influenced by the skepticism of his time with regard to religion.

He began his teachings at age 30. He traveled alone from one place to another teaching the few disciples who gathered around him. His reputation as man of knowledge and character, with great reverence for traditional ideas and customs, soon spread throughout the kingdom of Lu, then to all of China.

Starting with the Han Dynasty, several emperors drew their inspiration from the teachings of Confucius to organize Chinese society. In later centuries, his teachings exercised a powerful influence in Chinese philosophy and in the history of China.

During her second half of the period in which China was governed by the eastern Zhou Dynasty, the central government underwent a process of degeneration and decadence, where intrigues were generalized and laxity of customs prevailed. Confucius deplored the disorder of those times, as well as the absence of moral models. For this reason, he reached the conclusion that the only remedy was to retrieve principles and precepts of the sages of old and to spread them among the populations. This was why he taught his disciples the classics of Chinese literature. He also underscored the importance of music, which in those times had ceremonial and religious functions in state and cult practices. He advocated the great value of the power of example. Rulers, he would say, can only be great if they lead exemplary lives. This way, the citizens of their states would have the necessary incentive to reach for prosperity and joy.

Confucius is said to have implemented many reforms that led to an administration of justice characterized by impartiality and to the practical eradication of crime. Confucius left his position in 496 B.C. and devoted himself to traveling through different territories teaching classes and hoping in vain that some other prince would allow him to undertake reforms. In 484 B.C., after his search for an ideal ruler had turned out to be completely fruitless, he returned for the last time to Lu. He spent the rest of his life writing comments on classic authors. He died in Lu and was buried in Qufu (Shandong) in 479 B.C.

In essence, his teachings are summarized by good behavior in life, good state government (benevolence, justice, and respect of hierarchy), care for traditions, study, and meditation. The greatest virtues are: tolerance, kindness, benevolence, love of one’s neighbor, and respect of the elderly and of ancestors. If the prince is virtuous, citizens will pattern themselves on his example. A prosperous society will be obtained only if ruler-subject husband-wife, father-son relations are fully harmonious.

We can summarize the Confucian doctrine as a series of mandates that should be the duties of all men of government:

_ * Love the people, rejuvenate them morally, and offer them the means necessary for their everyday life. For this reason, He who is the First Ruler is who should be served above all, with sovereign respect.
_ * Cultivate personal virtue and tend unceasingly to perfection.
_ * In private, as in public life, always observe the higher path of the “Constant Mean.”
_ * Keep in mind the two forms of inclination of men: some come from the flesh and they are dangerous; the others belong to reason and they are very subtle and easy to lose.
_ * Practice the duties of the five social relations (explained below).
_ * Have as final goal universal peace and general harmony.

The {Anaclets of Confucius} were written by his disciples. They show that he based all his moral philosophy on a central teaching: rén (jen), which is the virtue of humanity and is in turn based on benevolence, loyalty, respect, and reciprocity. These values are indispensable in human relations, which Confucius described as:

Nothing of what Confucius wished to carry out was new. Rather, it reflected, as he himself would admit, what had already been said by a long tradition of sages. His ideas were based on a spiritual legacy that had been assembled by the school of the Ru, or the literate, and more concretely by Confucius himself.