Migrants spearhead an unprecedented political-cultural battle: to open new routes to the world 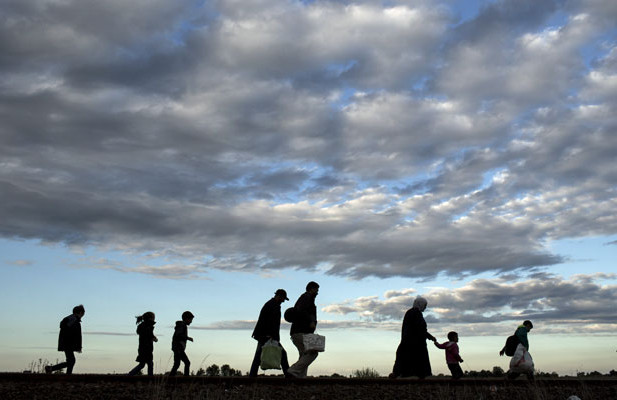 “"The river that carries everything away is called violent, but no one calls violent the bed that oppresses it". - Bertold Brecht

“It is not the earth that moves this time, it is we, migrants. The migrants, all those people going through the many forms of human mobility, we are a substantial part of the new world reality and also an emblematic expression of its contradictions and challenges”. Latin American letter from migrants

Human migrations are surely the most compulsive transnational phenomenon and a sign of the aging of the old worlds that are not yet dead or that are trying to be reborn under more regressive forms. In the face of the capitalist globalization "of destruction", as it was characterized at the recent World Social Forum on migrations that took place in Brazil (July, 2016), migrants are constituted as particles, be they ethic, intercultural, erotic, communicational, civilizing, the carriers of alternatives and of other worlds that clash with the exclusionary frontiers of a world dangerously entangled in the past. One of these frontiers has to do with the resistance to giving new meaning to human mobility as a new political and social horizon. The escalation of this resistance, leading to a real negation of the human migratory earthquake, is not exclusive to the field of migrations. It is part of what we can call the great ethical, political and cultural battle to embrace, interpret and dispute the unprecedented transformations brought on by the globalization of the planet.

It is always useful to step back and take stock of the scope of the "migratory course" assumed by the global order, marked today by a compulsive human mobility comparable to that which took place during the Second World War. It is currently estimated that there is an approximate total of one billion migrants, among them 250 million transnational migrants (concentrated principally in ten countries of destination) and 750 million internal migrants, representing a total of 30% of the planetary work force.

Within this total, there are 52 million refugees and 50 million climate-displaced people who may reach 250 million in the coming decades due to the announced trend of climate change. The industrial countries house only 14% of the refugees, while the emerging countries or those in development have received 86% (the population of some countries such as Lebanon are made up by one fourth of refugees). In the main central Western countries of destination, migrants contribute to generating economic wealth constituting up to one third of the national GDP, as is the case of the United States. These migrations, that we can describe mostly as feminized, forced, invisible, precarious and unregulated, generate a growing political-cultural impact, that as yet has been little analyzed in the countries or regions of destination.

Beyond reinforcing border-lines, today the anti-migratory walls appear to have hardened in the interior of subjectivities, imaginaries and spaces of political decision. In the subjective terrain, the great economic deceleration begun in 2008, added to the subterranean effects of a new communicational and emotional geopolitics, has instigated a come-back of passions in the political field, both for better and for worse. Fear and its irrational derivatives have dangerously contaminated the political compass that has been amply instrumentalized by ultra-right political groups, as we see in Europe, the United States and several emerging countries [1]. At the level of the imaginary, contemporary migration is still polarized by schemes of interpretation developed in a period when the concepts of military power called the shots, with Western centrality, cultural uniformity and a national enclave inherited from the Westphalian equilibrium. What does this teach us in practice? In fifty years, the proportion of transnational migration in relation to the world population has increased only 2% to 3%, contrary to the forecasts of several decades ago that envisioned a massive migration coming from the former-USSR, from the countries of Eastern Europe or from Africa. In the heart of Europe, even the Bundesbank has foreseen the need for Germany to integrate 200,000 migrants annually to maintain its economic dynamism [2]. The present migration of thousands of Spanish citizens to Morocco to find work is also a sign of the times. These data, while they are economic in character, can be extended to almost all of the industrialized countries, providing an idea of a "parallel imaginary" in which the understanding of the migratory question is isolated (or manipulated).

At the same time, in a large portion of the political class of the central countries and more moderately in some emerging countries, the storyline appears to have taken on a kind of triple instrumental rhetoric, of security and negation. On the one hand, the situation of the migratory crisis is dramatically converted into an element of political-electoral marketing instead of being defined as a transnational policy issue in the long term. Migration is painted either as a negative cause of the European Union as a "tea strainer", or as a threat to physical, identity or labour security, possibly associated with the terrorist threat. On the other hand, defensive and technical approaches predominate in state policies, that is to say based on a State monopoly over the migration option, with recourse to an arsenal of monitoring devices, externalization and border control that has been unleashed since the geopolitical turning-point in 2001. In the end, the political arena is turning its back on the scientific, historical and ethical arguments on migration, and thus on the role of politics to develop an adequate response to the phenomenon of human mobility that is so permanent, inevitable and transnational. Obviously, there are no binary responses to such a complex phenomenon as today’s human mobility. But in general it is obvious that instead of going towards a broader political construction of this theme, the public authorities have allowed themselves to be cornered in a narrow imaginary-discourse that ends up feeding even more into human despair and the holes existing in migratory regulation.

Faced with this scenario, the migrants invite us to retrace the perceptive and reflexive barriers in order to gain a profound understanding of the new language that they are writing on world power. Human mobility is definitely another name for a scattered social force that is pushing towards a world that is transnational, intercommunicated, free of territorial limits, socially integrated, fully impacting the architecture of the global playing field. While the promoters of exclusionary globalization tend to take refuge in nationalism, hyper-concentration of wealth and ethical cowardice, the migration routes weave a contrasting fabric of transnational, pluricultural, multipolar, solidarity-based and horizontal community, that is obviously not free of contradictions, but is in a constant search and existential experimentation. "Migrate to live and survive", as the emotional migrant banners proclaim. To migrate, in the end, in order not to march behind the "necropolitics" of neoliberal globalization, but to embrace the possibility of humanizing globalization and foreshadow some sort of proto-political global solidarity, equality and planetary coexistence [3]. In the background lies a formidable challenge to decolonize our visions of ourselves and our insertion in the world.

Thus, the migrant organizations appear to visualise more clearly the need to intensify the imaginary-cultural dispute in order to push towards a decent horizon for mobility. A number of meetings that have taken place in recent years add new denouncements of the gravity of the economistic and security paradigm, sustained by the peddlers of hatred, myths and lies, and amplified by the mainstream media, that asphyxiate the political capacity to install new scenarios. The European situation or the scarcely audacious track taken by the high level Summit of the United Nations to take place in September 2016 [4] illustrate this gap. A new multilateral architecture is demanded, with binding mechanisms. But what can one hope for from the present regime of Balkanization in international relations? As was underlined in the debates in the Forum on Migrations in São Paulo, this political battle involves the information struggle but has to do above all with a broad communication struggle. It is a struggle to question the migratory negation and reconstruct its meaning from a positive, realist and desirable location, creating scenarios of alliances and confrontations with other social actors, inseparable from the struggles for human rights. One of these scenarios has to do with local experiences that demonstrate viable and successful itineraries of integration, inseparable from an epochal horizon of post neoliberal confrontation. Another scenario has to do with public space, popular resistance and the growing micromedia movement in various regions that can help in visualising migratory movements. It appears that these scenarios are previous steps to displace the deadly tendencies, accumulate forces to change the regulatory frameworks and construct ways to build new worlds.

(Translated for ALAI by Jordan Bishop)

[1] Fear is not a good counsellor, Roberto Savio, Other News

[4] UN Deadlocked Over Draft Agreement on Refugees and Migrants