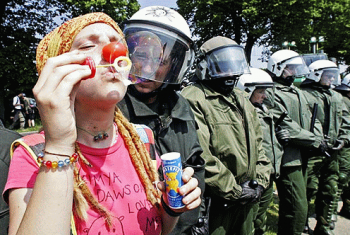 In this analysis of the alterglobalization movement, the authors underscore, on the one hand, the victories of this movement, barely 10 years old, and on the other hand the obstacles it still needs to overcome against those who own the capital and destroy human beings and the planet a little more each day. This editorial was published in the daily L’Humanité on January 21, 2007.
Ten years after the emergence of the alterglobalization movement, how far have we gotten? We can claim two victories. First, we have shattered the consensus of opinion surrounding the international institutions that have enslaved people under their control. The International Monetary Fund and the World Bank, with their structural-adjustment plans, have forced the poorest nations into bankruptcy. The myth of a G-8 concerned with the fate of humanity has vanished and revealed its true agenda: defending the sordid interests of large economic and financial groups, and their masters, who meet in a conclave every year in Davos.

The second victory was to open areas where people can voice their opinions, and involved citizens are able to share their analyses and their experiences. The World Social Forum, the Continental Social Forums and the Local Social Forums have given birth to a new form of popular expression. The latter's originality lies in the diversity of its speakers, and in the fact that it is rooted in the great tradition of self-management through a desire for participatory democracy.

On the other hand, these social forums must provide support to overcome the problems involved in moving from a phase of criticism of neoliberal capitalism to a phase of advancing alternative proposals. We have reached a turning point in alterglobalization. It must not lose any of the radical nature of its criticism but also build, around strategic objectives, a consistent approach to the alternatives being drawn up and work on the convergence of the movements designing those alternatives.