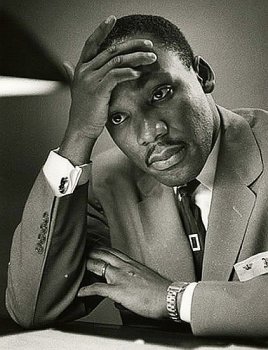 
Martin Luther King, Jr. (January 15, 1929 – April 4, 1968) was an American clergyman, activist, and prominent leader in the African American civil-rights movement. He is best-known for being an iconic figure in the advancement of civil rights in the United States and around the world, using nonviolent methods following the teachings of Mahatma Gandhi. King is often presented as a heroic leader in the history of modern American liberalism.

A Baptist minister, King became a civil-rights activist early in his career. He led the 1955 Montgomery Bus Boycott and helped found the Southern Christian Leadership Conference in 1957, serving as its first president. King's efforts led to the 1963 March on Washington, where King delivered his "I Have a Dream" speech. There, he expanded American values to include the vision of a color-blind society, and established his reputation as one of the greatest orators in American history.

In 1964, King became the youngest person to receive the Nobel Peace Prize for his work to end racial segregation and racial discrimination through civil disobedience and other nonviolent means. By the time of his death in 1968, he had refocused his efforts on ending poverty and stopping the Vietnam War.

King was assassinated on April 4, 1968, in Memphis, Tennessee. He was posthumously awarded the Presidential Medal of Freedom in 1977 and Congressional Gold Medal in 2004; Martin Luther King, Jr. Day was established as a U.S. national holiday in 1986.

"I Have a Dream" is a 17-minute public speech by Martin Luther King, Jr., in which he called for racial equality and an end to discrimination. King's delivery of the speech on August 28, 1963, from the steps of the Lincoln Memorial during the March on Washington for Jobs and Freedom, was a defining moment of the American Civil Rights Movement. Delivered to over 200,000 civil-rights supporters,1] the speech was ranked the top American speech of the 20th century by a 1999 poll of scholars of public address.[2] According to U.S. Representative John Lewis, who also spoke that day as the President of the Student Non-Violent Coordinating Committee, "Dr. King had the power, the ability, and the capacity to transform those steps on the Lincoln Memorial into a monumental area that will forever be recognized. By speaking the way he did, he educated, he inspired, he informed not just the people there, but people throughout America and unborn generations."

At the end of the speech, King departed from his prepared text for a partly improvised peroration on the theme of "I have a dream", possibly prompted by Mahalia Jackson's cry, "Tell them about the dream, Martin!" He had delivered a speech incorporating some of the same sections in Detroit in June 1963, when he marched on Woodward Avenue with Walter Reuther and the Reverend C. L. Franklin, and had rehearsed other parts.

Final speech at Mason Temple. On April 3, 1968, the Rev. Martin Luther King Jr. delivered his final public speech. In a crowded church in Memphis, Tennessee, King spoke of the injustice felt by the city's sanitation workers, who were on strike protesting low pay and poor working conditions. But, speaking hours before his assassination, the civil-rights leader went beyond that subject, touching on death and his own mortality.

"There had been so many death threats against his life, especially since he had come out against the war in Vietnam," says the Rev. Samuel Billy Kyles, who was listening to King just a few feet away. "But he talked about death more that night than we'd heard him talk about it in a long while."

Kyles says he's "so certain" that King "knew he wouldn't get there, but he wouldn't tell us that. That would have been too heavy for us, so he softened it." When he speaks to people who were not alive or too young to remember King, Kyle says he tells them, "we're not going to get to the place where we can say, 'Dr. King's dream has been realized. Now we can go to the beach.' That's not going to happen. Much of it has been realized, but there is so much to do. But each generation will have its portion, and that helps to keep the dream alive."