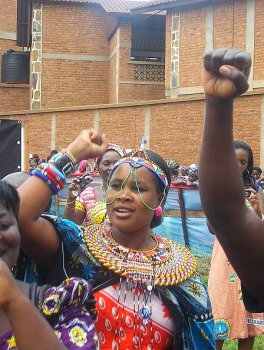 The World March of Women (WMW) is an international feminist movement rooted in
grassroots organisation. We believe in challenging the root of our poverty and our oppression
by building solidarity amongst women and men through action. The year 2010 marked
our 3rd International Action. Thousands of women across the globe marched under the
slogan…”Women on the March Until we All are Free!

Starting with the Women’s Manifesto for Peace, read out at the Closing Event in front of 20
000 people in the central square of Bukavu, South Kivu, in the Democratic Republic of Congo
(DRC). The declaration captured the values of the Global Women’s Charter for Humanity
developed in 2005 linking the 2010 Action by denouncing the growing militarizationof the
world and its causes.

It follows with the very emotive Message read at the Inauguration of the Memorial to the
Women Martyrs of the War in Mwenga (DRC) 16th of October 2010.

The third text Why South Kivu, DRC? – outlines the reasons for choosing to end the 2010
Action in a country that is still under siege and the reality facing the women in the DRC.

The fourth document - Evaluation of the Closing Event of the 3rd International Action in
Bukavu, South Kivu, DRC - shares the learning’s and challenges faced organising such an
enormous event, feminist solidarity in action!

The fifth document outlines the activities organised by the WMW National Coordinating
Bodies and Participating Groups in over 76 countries around the world, on a local,
national,regional and international level, over 220 days with an estimated participation of
over 80 000 women and men.

We end by looking at the current Socio-politico-economic Context and the challenges for
our construction as a permanent feminist and anti-capitalist movement in preparation of our
8th International Meeting to be held in November 2011, in Quezon City, Philippines.

By World March of Women