Take Back the Land! 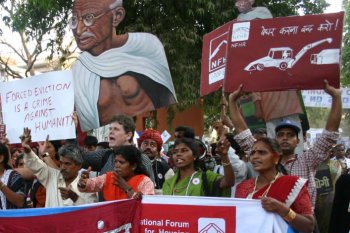 If land, whether rural or urban, were viewed as playing an essential role in all human beings’ life, just like air or water, and its value in use outweighed its exchange value, wouldn’t our cities and countryside look completely different ? A reflection on different ways to relate to land - other than ownership – must therefore be carried out, i.e. ways that do not entail abusing, speculating or excluding others. This issue sheds a light on analysis, experiences and alternatives regarding the progress of the social function of land and housing worldwide. Its singularity is linked to its insight into a potential alliance between inhabitants and peasants, between rural and urban issues.

Thus, it constitutes an advocacy tool for the organisations that strongly claim for the social function of land, the housing rights and the right to land.

Analysing its implications is crucial to help support struggles for the right to
housing, to land and to the city for everyone. Chapter 1, “Urban and Rural
Inhabitants’ Insecure Real Estate and Land Rights” focuses on deciphering a
series of sometimes abstruse concepts, such as tenure security. This chapter
presents an analysis of land issues in rural as well as urban settings in order to
understand how resistances and alternatives which stress the social function
of land make sense.

Throughout this issue, we have set forth answers to the questions raised by
ownership, which is still, in most countries, at the heart of mindsets and Constitutions. This is what Albert Jacquart explains in his latest text: “
It is no surprise
that most Constitutions refer to the right to property as a Human Right. The goal
is to provide a stable framework for individuals to develop. Initially, this right to
property concerned useful commodities for daily life and aimed at preserving
social cohesion. The scope of ownership gradually broadened and shifted away
from what made it legitimate. Numerous societies added the right to transmission through inheritance to the right to use; ownership therefore spread from
one generation to the next. Ultimately, in a finite universe, this process can only
lead to a widespread blockage due to the depletion of available commodities”

The validity and ineluctability of private property are deeply rooted concepts
in many societies. Few individuals plan their lives without thinking of owning
a home or a plot of land. Even though it involves being indebted for years,
sometimes even paying three or four times the initial price for one’s home,
or even losing one’s home, in addition to having to pay back one’s debt in the
event of payment defaults, as has become apparent in the case of Spain since
the 2008 crisis.

The ensuing injustice leads to uprisings and rebellions by populations who yearn
for more equality and social justice. In Chapter 2, “The Right to Land, Access
to Land: a Major Trigger of Rebellions”, the issue of land appears as a trigger
for large-scale mobilisations, as illustrated in Istanbul, Rio, São Paulo or during
the Arab Spring. This is also true in rural areas if we take into consideration the
autochthonous people’s struggles, such as in South and North America, as well
as resistances to land grabbing phenomena.

If land, whether rural or urban, were viewed as playing an essential role in all
human beings’ life, just like air or water, and its value in use outweighed its
exchange value, wouldn’t our cities and countryside look completely different?
A reflection on different ways to relate to land – other than ownership – must
therefore be carried out, i.e. ways that do not entail abusing, speculating or
excluding others, as practiced by autochthonous peoples. Chapter 3, “Proposed
Action for the Social Function of Land and Housing”, presents experiences in
different land and housing uses and types of tenure, namely some collective
forms, which better respond to the aim of social justice.

Latin America has made progress thanks to the decade-long struggle of social
movements, namely in Brazil, where the idea of the social function of property
was included in the Constitution
, thus questioning the untouchable idea of private
property.
Indeed, private property
is now accountable for playing a social
function,
which is, moreover,
aimed at social justice. This will undoubtedly limit
misuses,
especially by large
landowners, without nevertheless fully guaranteeing social
justice when it comes to land and housing in the country.

This highlights the fact that legal progress, often achieved thanks to the implication
of social movements, is necessary if rights are
to be obtained. This must be
accompanied
by a constant citizen oversight of the effective enforcement
of these
newly conquered rights, since the right to private property remains dominant.

This issue is the result of a collective work coordinated by Charlotte Mathivet from AITEC in the framework of the Coredem, a collective initiative of knowledge sharing coordinated by Ritimo. Citego, an international site of documentary resources on the transition towards sustainable societies, supported the Passerelle publication and publishes all the articles freely online (Creative Commons).