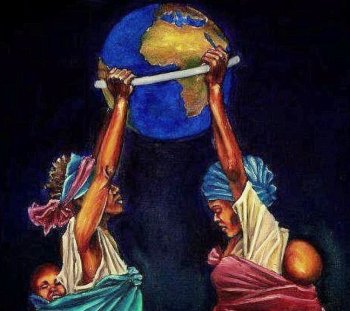 { {{Mandela is dead! Long live Mandela!}} }
_ Death did not surprise him; he knew that his cry for peace and justice had been heard.
_ Death will not stop him because other hands and other faces have always taken up his weapons and his words.
_ Mandela embodied our struggle; he will continue to embody it! Dead or alive!

{ {{We are the world. We are the people
_ We are a people. We are Mandela!}} }
_ Madiba always carried within himself the dignity of both the Thembus and the Xhosas, and that is why he carried within himself the dignity of the Black People, South Africa, Africa without limits, and Universal Humanity.
_ He incarnated a world embracing {all} the worlds.
_ We are the here-and-now generations. We are the children of Aquarius, the children of Ubuntu, and those of Pachamama; we are the Anonymous, {Indignados}, and Occupy movements. We are the Pussy Riots and the Mothers of the Plaza de Mayo. We are the Yin and Yang of humanity on the planet. We are the feminine and the masculine reconciled in all their biological and social forms. We are waves and particles, and the matter of change—the world’s movement. We are the social networks and the flashing, virtual, potential, actual, driving, Transitioner, communities in transformation moving toward a civilization of Commoners, toward a global, democratic, peaceful, sustainable, solidarity-based society: a responsible society.

We are the Jasmine, the Red Carnation, the hundred thousand flowers already blooming in the one-day revolts or deep transformations of an interconnected world that here, is collapsing under the blows of the financial markets and there, is exploding under the tsunamis of climate disasters. We are the children of Chernobyl and Fukushima, the children of disasters in the making; we are the children of war, the deported, the refugees, the disabled, the tortured, the slaves, the forgotten. We are the devastated victors and the resilient victims. We are {“Ya Basta”} and {“Dégage!”} We are all WikiLeaks and whistle blowers. We are free software. We are the world front of refuseniks, the universal rebel. We are all that, yes, but that’s not all!

{ {{We are a freedom movement}} }
_ We are a movement in motion, on the way to our freedom. That of each and every one of us, and that of the whole of humankind.
_ We want to free ourselves from the madness of the powerful who are driving us mad! Mad with poverty and mad with inequality, mad from exhaustion and disease, mad about our land and our planet, confiscated and soon to be uninhabitable, mad with competition and rivalry, mad with resentment, hatred, and despair.
_ We are releasing ourselves and leaving to discover our own humanity and our own serenity, to invent our {buen vivir} and our {buen gobierno}, in a world finally decent, at our measure, in which each and every one can take their responsibilities, simply, with loving kindness.

{ {{We are resistance and we are demanding}} }
_ We have kept within us, each within himself, herself, and most of all together, the force of commitment: which is why we resist; and which is why we demand!
_ Each of us is of course our own subject, unique, incomparable in our suffering and joys, fears and anger, dreams and hopes, loyalties and allegiances, solidarity and responsibility, always reinvented.
_ But as actors in motion, we have no face, we are shadows, masks in the theater of operations, because we are the extras and the understudies, prompters, comedians and tragedians, tightrope walkers and acrobats, interchangeable as we play, in turn, the pathfinders, the infantrymen, the security guards, the strategists or generals of a world movement in marching order. We don’t want to take power. We want power, the kind that is negotiated, shared, overseen, handed over.
_ We are cross-cultural, trans-generational couriers in the contemporary world of immediate translation and simultaneous interpretation. We are life when it rustles and springs forth, we are the dead that we carry within ourselves. We are the diversity of Humankind, who knows how to say “We, the Humans ...”
_ { {{We are the rainbow nation-world.}} }

_ { {{We are a world liberation front}} }
_ The time of {national} liberation fronts is past; they are no longer only national!
_ Our challenges are global: we demand world liberation!
_ We demand, everywhere, respect for human, individual, and collective rights, for civil and political rights, for social and cultural rights, for the rights of minorities and future generations, for the rights of the planet and of its diversity.
_ We demand that the world’s organization be fairer!
_ We demand world democracy: decentralized democracy where powers are devolved!
_ We demand the eradication of poverty!
_ We demand that the rich be less and less rich and that the poor be less and less poor. We demand health and universal education; a decent income!
_ We demand reconciliation and disarmament!
_ We demand to be able to manage the planet’s and Humankind’s common goods, collectively and sparingly.
_ We demand immediate passage into the post-oil era, the post-nuclear era, the post-GMO era!
_ We DEMAND! We have only just started to demand ... and our demands are far from over!

{ {{We are everywhere. We are interconnected
_ We are organizing locally and globally}} }
_ We met in Qunu. We celebrated death and life!
_ We cried and we smiled.
_ We were petrified and we danced.
_ We were serene and exalted.
_ We looked at one another, and everything was clear.
_ We were the world liberation front. We would call it {Mandela}!
_ We were not many, but we were from everywhere.
_ We met and we drafted, almost with the stroke of a pen, almost without crossing out a single word, in just one night, this our front’s first statement.
_ It wasn't hard: we know exactly who we are and what we want.

{ {{We are a front!}} }
_ We do not fear confrontation. We demand it
_ We recognize our adversaries and our enemies. We know that they recognize us. We believe in neither angels nor demons. We believe in the balance of power. And have only begun to know our strength.
_ We have been here for a long, long time, measured in tens of years for some of us. We were of course in Tiananmen, in Berlin when the wall fell, at the Rio Earth Summit, in La Realidad, in Seattle, in Porto Alegre, in Copenhagen, but also this year in Tunis and Cairo, in Santiago, Madrid, Athens, Istanbul, São Paulo, in Bangkok, in Kiev, in Bogotá, and everywhere else! We already know how to create 1, 2, 3 “people’s springs.” All we need is a front to coordinate. A wide, people’s front, a salvation front, a world front.

And we shall be on all fronts. On the climate front, on the food-sovereignty and the land-grabbing fronts! On the fracking fronts and on those of large useless projects. On the fronts of the struggle against bilateral transatlantic and transpacific free-trade agreements. We will be in local assemblies, alternative villages, World, Regional and Thematic Social Forums, the Climate Forum, the Alternatiba movement. We will be in the streets, in the squares, behind our pens and our screens. We will be on fronts and in places that neither we nor our opponents have yet imagined. Because we will be in all places where we gather by the thousands. And where a few of us will gather to resist, we will all be their sound box, their loudspeaker, and their purse when solidarity is also measured in dollars.

We will certainly not miss the climate summits in Lima, next year, and in Paris in 2015, and we will be mobilized across the planet.

{ {{Mandela is dead! Long live Mandela!}} }
_ We were waiting for his death, to embody his struggle!
_ It’s our turn now to take up the torch.
_ We are proud and apprehensive.
_ Our commitment is ambitious and our responsibility is great.
_ But we shall be so many!