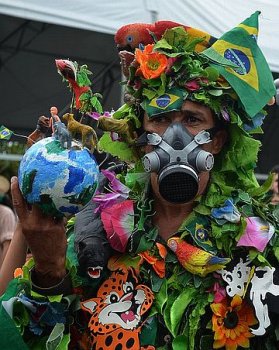 Where have we got to at the end of the day? Where are we going? What vision do we have of the destiny we share so closely with nature? In what way can we create the conditions to ensure that all human beings, whoever they are, can live well and find happiness while caring for and sharing the generous planet that is our home? What changes do we need to make to the way we currently organize ourselves, produce and consume, a system that produces a shameful level of exclusion and social inequality and destroys the basis for life? These are questions that need to be asked as the Rio+20 conference draws to a close, and as our governments once again demonstrate a lack of determination to launch into a major reconstruction of a world in crisis. There has been much official pomp for nothing, spreading increasing doubts about our collective capacity to change direction and work towards the sustainability of life, all forms of life, and the integrity of Planet Earth. Meanwhile, the crisis is worsening and collective uncertainty is growing. Rio+20 is fuelling the destructive capacity of the world crisis, instead of taking advantage of this historical moment to make the changes that cannot be put off any longer.

We need to state loudly and clearly that this crisis with all its different facets—climate, environmental, financial, food, values—that is affecting the whole world also has another component: a crisis of governance. This aspect can be seen, on the one hand, in the lack of a structure for world power with more legitimacy than the current version. Multi-lateralism is running out of steam and proving powerless in the face of the permanent threat of armed imperialism and its power of veto. In addition, its scope comes into conflict with states and their ageing national sovereignties. It is important to add to this summary assessment that today’s globalized economy and the health of state public finances depend on the enormous power of the huge economic-financial corporations, which subject the world to their pursuit for profits. Our world governance is led by corporations rather than states.

On the other hand, the governance crisis is also part of the total lack of vision and will to change displayed by political leaders as well as the parliaments that support them, regardless of how limited and contradictory is the political margin they retain in the face of the so-called power of the markets. Even if it seems impossible, the great projects in the history of humankind have always been started off by dreaming and thinking up ideas, then creating the conditions to make them possible. In the light of the prospect presented by today’s world and the pathetic Rio+20 conference, we can see that there is something missing on the world scene: politicians with significant political and ethical reach, generous and committed, who listen to the voices of the nascent global citizenry and pick up on their demand for immediate change, politicians who would promote the definition of strategies and democratic agreements aimed at setting up processes for change, here and now.

It is worth noting that the failure of Rio+20 could, to some extent, have been predicted. I myself wrote of series of chronicles on this subject. But there was still that glimmer of hope that something would happen and that the outcome would be different. At the end of the day, politics, and especially democratic politics, are always unpredictable in terms of their results, or at least, how and when those results are obtained. But this time, in the name of “efficiency”, diplomatic efforts opted for the lowest common nominator and ended up with less than the required minimum, less than Eco 92 and much less than the minimum demanded by public opinion and the various citizens’ voices around the world. As always, there is something positive that contrasts with the outcome of this hopeless conference: the green economy, promoted as sustainable development, did not achieve consensus and nothing was approved in this area. The big corporations, while they can be happy with the established power’s collective incapacity to change how the global economy is organized, have no triumphs to celebrate, since they were not given the freedom to launch a new destructive front of regulation-free business activities, monopolizing all of nature with their biotechnologies, nanotechnologies and geo-engineering. But the battle is not over.

The party lacking a more incisive presence at Rio+20 was the budding global citizenry. However, this is where the springboard needs to be for the emergence of irresistible citizens’ movements that will change the course of history. We tried to prepare for this and were at the People’s Summit in reasonable numbers. Many people took part in the People’s Summit as well as the remote Rio Centro. A number of them, as always, exercised citizen diplomacy and tried to influence production of the final document. We made a fuss and that was it. We demonstrated, especially at Flamengo Park, the vibrant and happy diversity that characterizes the peoples sheltered by Planet Earth. However, we cannot deny that there were not enough people and we lacked the force to create a real political and democratic solidity capable of turning the game round or, at the very least, posing a threat. Nor did we overcome our fragmentation and the tremendous amount of noise generated in ourselves and echoing outwards. We did not get very far in terms of taking steps towards new paradigms, the motto that brought us together. We showed proof of indignation, a capacity to mobilize, but we did not yet show signs of the vision and proposals that are needed, based on multiple and diverse ideas, on the many and diverse social and cultural identities and on a pluralism of visions, analyses and modes of action. Governments’ incapacity to tackle its contradictions and, more especially, the corporate power, which was once again in great evidence at this UN conference, can only be overcome by our determination as citizens—responsible citizens—to create and take action to make other worlds possible. It is up to us to shoulder the task of forcing governments to change: we must get on with it.