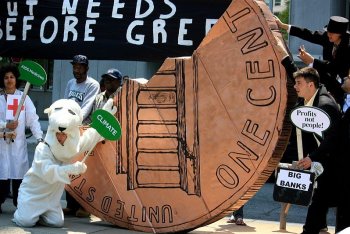 The labor movement presented in Doha, in November 2012, a proposal on how to raise the agreed 100 billion dollars to fight against climate change from public contributions, and how to go even further through direct investments from pension funds toward sustainable choices.

Finance is a key tool to advance climate policy. As was shown again in Doha, it is one of the key elements in the essential negotiations to seek an agreement. The ITUC, TUAC, and Sustainlabour organized on Friday, November 30 a side-event where a paper was discussed that offered proposals to overcome governments' resistance to raise the necessary funds. The event was chaired by Sharan Burrow, SG From ITUC, Pierre Habbard, Senior Advisor ITUC-TUAC, who presented the paper "Raising International Climate Finance," Liane Schalatek, Director of the Heinrich Böll Foundation US, Victor Viñas, Climate Change Director, Dominican Republic, Paul Quintos, International Policiy Officer, IBON, Michael Mullan, OECD Coordinator for Climate Change and Adaptation, Denis Benjamin (ETUC), and Romina Castro (TUCA).

Unions are calling developed countries to meet the 100 billion dollars promised by public funding and grants. The gap between commitments made by the developed world for the fight against climate change and for poverty reduction and the effective level of financing needed (which we call “global public-good resource gap”) ranges between 300 and 320 billion dollars annually for the 2013-2020 period. In addition, since the implementation of austerity policies in Europe, we are moving further away every day. It is in the hands of government to raise the needed money. The first step is to get away from austerity programs and the second is to be willing to raise those resources. How?

• Carbon-related taxation--including the repeal of fossil-fuel subsidies and the creation or strengthening of carbon taxes--must be stepped up and designed in a socially fair way and as part of broader industrial-transition policies.

• The tax base for international climate finance can and should be broadened beyond carbon taxation to include the financial sector. Various forms of financial-taxation mechanisms could be introduced. Rather than being mutually exclusive, they would complement each other.

• The creation of a global Financial Transactions Tax (FTT) or the coordinated implementation of several regional and national FTTs would considerably enhance the tax base of governments to match the global mobility of capital worldwide.

Institutional investors can and should have a complementary role given the change in scale in climate finance that is needed. Their role should add on to that of public financing, and not be a substitute for it.

Pension funds in particular represent an important class of asset owners and one with which trade unions have a special relationship. Our calculations suggest that the net contribution of pension funds to financing climate-change projects could potentially reach 300 billion dollars in 2015--if by that time portfolio exposure to climate change reaches 5%. There are important barriers that need to be overcome, however, for this financial contribution to be made possible.