Preparing Rio+20 at the Thematic Social Forum: A Historical Opportunity 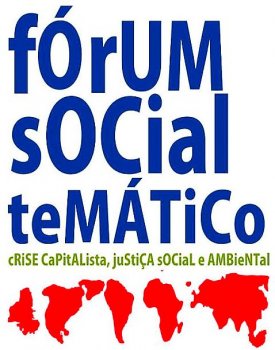 World Social forums, the first of which was held in January 2001 in Porto Alegre, constitute an international forum where organizations, networks, and civil-society movements meet periodically for mutual reinforcement and cross-fertilization. After 2001, every year until 2005 and every other year after that, World Social Forums have continued to assemble the different actors of global civil society. There are other alliances and networks, of course, that have organized international events, but the Social Forums represent a significant moment of assembly for actors who continue to meet, not only at the big world event every other year, but also at increasingly numerous and diverse Regional and Thematic Social Forums.

Eleven years after the first World Social Forum, the 2012 Thematic Social Forum at Porto Alegre (January 24 to 29, 2012), will be an event with new features. It could mark a defining turning point in the construction of new citizenship at the global scale. It will be a Social Forum and “something more.” Two factors will give it its singular character. One is expressed in the methodological wager being made by the Brazilian organizations and other networks and organizations that have been contributing closely to the organization of the event. This wager consists in building a process and opening a forum to highlight both the diversity and unity of the different actors. The first two days, January 25 and 26, after the opening on January 24, will be open to various thematic groups and to activities that each of the organizations wishes to promote. The next two days, January 27 and 28, before the closing on January 29, will be devoted to an effort to articulate, to seek closer and stronger links in order to overcome the fragmentation of civil-society organizations and movements. During those two days, everyone will gather around the four main themes that constitute the pillars on which we will erect the platform of the new citizenships we have been building. The four main themes are: Ethics, New Economy, New Governance, and Territories. The detailed presentation of this methodological wager is on the Web site of the Porto Alegre Thematic Social Forum Dialog Platform: dialogos2012.org

The second factor that will give this Forum in Porto Alegre a singular dimension comes from the global context itself. After the Durban conference that has just taken place in South Africa, as well as after the recent G-20 meetings, the global scenario is characterized by the inability of governments, especially those of the dominant powers, to respond to the challenges of climate deterioration, the aggravation of poverty and inequalities, and the growing tensions and conflicts in all regions and continents. We are at the threshold of a new age in which civil-society organizations and new social movements can open new avenues for the emancipation of peoples in this second decade of the twenty-first century commencing for humankind.

This will not, cannot be a lost decade. The severity of the different intersecting crises that are straining the planet and life itself is such that only a historical shock wave, marked by global awareness and a social and political movement, also global, is indispensable to open the perspectives of peace and prosperity that the world urgently needs. This is the reason that the next Porto Alegre Forum in January, in preparation for the Rio+20 Peoples Summit in June, arises as a historical opportunity. It will be a fruitful Social Forum and “something more.” Our FnWG teams are working actively with many allies to make of the Porto Alegre Forum and the Rio+20 Peoples Summit significant stages that will remain in the memories of the new citizenships of the early twenty-first century.

We are submitting here three Proposal Paper drafts that were debated at the international seminar organized by IBASE, the FnWG, and EURALAT in Rio last August. These texts are also contributions to prepare the debates around the main themes of the next Porto Alegre Forum.

* Proposals for a Fair and Democratic Architecture of Power

* Proposals for a Fair and Sustainable Economy

* Tracks and Sidetracks for Biocivilization


Ex-Director of the Forum for a New World Governance.  PhD in Political Economics.