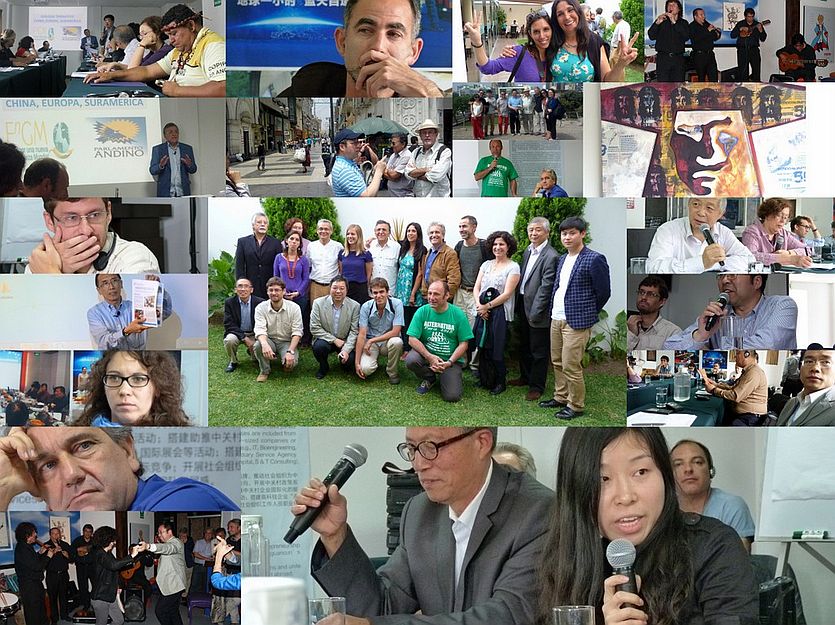 WE, CITIZENS OF CHINA, SOUTH AMERICA AND EUROPE, Gathering on the occasion of our “Third Dialogue Meeting between the civil societies of China, Europe and South America” in the framework of the Peoples Summit, taking place in conjunction with the U.N. Climate Change Conference (COP20) held in Lima, Peru, in December 2014, As citizens of the world, we leave this footprint on the path of our collective reflection and commitment, and we raise our voices to speak to the conscience of humankind: WE ARE A COMMUNITY OF DESTINY We are part of a profoundly diverse global community, in connection with each other and also with the planet, and we share an inescapable common destiny. Today contacts are multiplying between the various citizen, public and private, professional, commercial and cultural sectors from a variety of geographical origins around the world. However, they do not always have the pro-active objective or intention of expressing a common voice to help change the current global political system in such a way that it can represent and contribute to a world that is moving towards a different future. We assume our active responsibility in the need to remove frontiers by means of constructive dialogue of mutual respect, without ignoring the different cultural and conceptual contexts, the challenges and complexities of communication between diverse groups, so as to respond to the common challenges that the crisis of civilisation, accelerated by climate change, poses all of us, and to seek our survival and happiness as a species. FOR THE CONTROL OF CLIMATE CHANGE THAT IS ONLY POSSIBLE WITH PROFOUND CHANGE IN THE DOMINANT MODEL OF PRODUCTION AND CONSUMPTION Social and environmental sustainability is vital if we are to recover and preserve the connection between the Earth and human beings, and between these humans, since it has been damaged by an economic system based on individual utilitarian interests that take precedence over the common good. We need to replace the logic of the capitalist market and its false solutions, such as that which seeks to continue contaminating on “payment” of ever larger sums for such contamination. The action and mobilisation of large groups of persons, actors, movements and peoples is essential. This question is crucial and it must be understood that the reduction of poverty and inequality is a condition that is inseparable from an environmentally sustainable economy, and that both are inextricably linked. FOR A NEW POLICY TO DEMOCRATISE POWER AND PLACE IT AT THE SERVICE OF THE COMMON GOOD New social movements around the world: young people, angry individuals, students, indigenous peoples, citizens’ assemblies, etc., are being born as a consequence of distrust in the system and its crises. They demand that political systems and international bodies operate in a more participatory, inclusive way that will heed the voices of the citizens, and that decisions should be less bureaucratic. Within the European Union they are calling for a more open, more democratic operation that will allow all voices to be heard. In South America, they are energising progressive governments or are standing up to the neo-liberal policies of conservative governments, with a more autonomous programme and new methods of citizen mobilisation. In China, better understanding has been fostered between the different groups of interested parties, and has facilitated their future cooperation, thus confirming the positive role played by civil society. It is an on-going process. To strengthen it, we must foster the hope that drives the new struggles and emancipation processes. We must reaffirm multiple, diverse, intercultural dialogue and cooperation. The construction of new institutions and solutions must be nurtured.