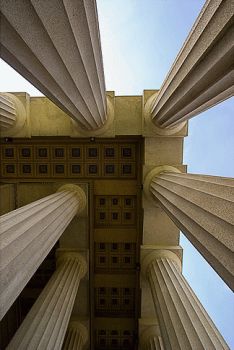 The EU-LAC bi-regional network requested to convene a session of the Permanent Peoples’ Tribunal (PPT) on Transnational Corporations (TNCs) in Latin America on 2 February 2006, to investigate the increasingly dominant role of European TNCs in strategic areas, such as services, infrastructure, petroleum, water, finance and telecommunications. They particularly asked for an examination of the threats thereby posed to political sovereignty, development policy, economic autonomy, environmental sustainability and democratisation in Latin America.
The network of organizations represented in Enlazando Alternativas 2 (EA2) requested a hearing of many cases from Latin American countries on aspects of life and work, rather than a formal judgment. The hearings of the PPT took place in three sessions following an opening session, each lasting around 4 hours. A detailed dossier of case studies and complaints was submitted to the jury. Witnesses and experts presented orally the documented cases and also answered questions posed by members of the jury.

The members of the jury of the PPT heard testimony and case studies concerning several European TNCs and banks and in particular, of the complicity of European governments that aid and abet their own TNCs, as well as that of several International Financial Institutions and bilateral free trade agreements and investment treaties, that pave the way for the exploitative activities of the TNCs.

The cases covered several areas of TNC activities and their impact on: natural resources, labour rights, public services with particular emphasis on water provision, sewage and electricity, the role of global finance and the role of TNCs active in financial services in Latin America, the food chain and agricultural diversity, the oil and gas industry. The cases concerned abuses of human, social, cultural and workers’ rights, their irresponsible and sometimes irreversible actions towards the environment and their complete disregard for the welfare of local communities.

The cross-fertilization of action and analysis, that this Tribunal seeks to foster, makes its work more than a mere academic exercise, but rather a genuine effort to contribute with its experience to a common endeavour of social, environmental and labour movements in both regions.