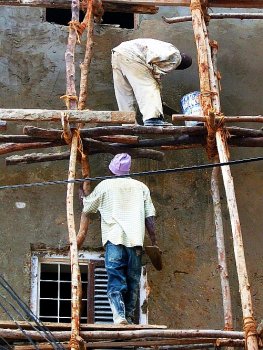 Although there have been a few attempts at building a new world governance, the latter has remained largely embryonic. It is nonetheless possible, in the vast open space of world governance, to move forward in great strides, even with limited means, precisely because there is plenty of space.

Advancing proposals is a risky, but indispensable enterprise. The Proposal Papers that have so far been contributed to the Forum for a new World Governance are there as a way of daring to consider the future and to change it.

To illustrate this, and to raise a debate and prompt some new thinking, we are presenting below a few leads that have turned up from a first cross-analysis of the Proposal Papers available so far and the many proposals they contain. We will have to progressively identify the proposals likely to bring about real progress in the medium and the long run. This choice should be based on their potential to mobilize both the will and the power of networks likely to support them.

1. A transnational reconfiguration of territories
_ 2. A world army
_ 3. WGI: a first draft for a World Governance Index
_ 4. Multi-stakeholder forums articulated with the different industries: the keystone of an effective world governance
_ 5. Overcoming ressentiment: a historic challenge for building a new, responsible, plural, and solidarity-based governance

1. A transnational reconfiguration of territories

One of the fundamental features already marking the new architecture of world governance is territorial reconfiguration. The problem is that it challenges borders. So we should not be demanding borders to be removed—something the world is not ready for yet. Nonetheless, human, economic, commercial and technological, religious, etc. cross-border circulation is already clearly happening. This is underscored by the Proposal Paper on migrants (writing in progress). It is happening in Amazonia, as well as in Europe, in Asia, in North America, in the Sahel-Sahara region, etc. It is difficult to qualify these processes precisely because they are varied, but what is already well-known is that the new territories are more flexible and better adapted to the material and historical configuration of the biosphere. This is perfectly clear in Amazonia. It is obviously true for the circulation of water, as stated by Larbi Bouguerra in his Proposal Paper on the subject (writing in progress). Take, for instance, the new renewable-energy matrixes, where what is essential is the articulation of several energy sources: the Germans have already designed an integrated system of energy-supply centers based on wind, photovoltaic, solar thermal, tidal, biomass, etc. power, where what we could call “the energy territory” reaches largely beyond borders, covering the Sahara desert, all coasts of the English Channel, the whole of the German plains, etc. The key will be to find other mechanisms, not exclusively depending on states, but not ignoring them either, to build these new territories.

This proposal can be drawn from the Proposal Paper written by Jean-René Bachelet, "Controlling Violence in a Globalized World" (writing in progress), featuring very specific and relevant proposals, one of which is particularly powerful: that of a world army capable of preventing the new wars that are brewing, especially in the Middle East and in Asia around Pakistan and Afghanistan. Basically, the idea is simple: “the world community” needs this army to avoid wars and, one never knows, its own self-destruction (for instance if nuclear warfare is unleashed ... not pure speculation where Israel and Iran are concerned, as clearly underscored by François Géré’s Proposal Paper in progress on world governance of nuclear power). The problem seems just as simple: a world community has not (yet?) been built. It is not represented by the UN. So how do we go about it? Under whose authority would a world army be placed? Obviously, placing it under the command of the Security Council would be “inappropriate,” to say the least. The question of building a world community is thus connected with the reconfiguration of territories discussed in the previous point. We should be able to develop a new articulation of territories that are not too rigid and not exclusively dependent on states. A world army should not, however, be scattered among the territories. This is where we can plainly see “the distance” separating us from a sustainable architecture of world governance. In any case, proposing a world army based on voluntary participation, independent from the states, and governed by international law (which definitely already exists) makes us take our thinking “a notch higher” because we have to consider the “framework” needed to support and enclose the new architecture of world governance for a safer and more peaceful world.

3. WGI: a first draft for a World Governance Index

The concept of indicator or index is highly controversial. The fact is that indicators, including those developed by the most reputable agencies such as the World Bank, are often exploited for questionable ends. Moreover, regardless of how indicators are used, how they are designed and developed should also be viewed with much caution, given the unreliability of the data on which they are based and the sometimes dubious motivations of the institutions that develop them. Despite the many flaws inherent to the batteries of indicators in all categories, indicators can be used wisely. To do so, intentions should be honest and expectations humble. Otherwise, insofar as many actors are willing to develop indicators or have an interest in doing so, it seems preferable to support the development of serious indicators rather than letting more-or-less questionable institutions develop relatively unreliable indicators. These were the grounds for our deciding to commission the first draft of a world-governance index, the first objective of which was to see if it could be of any use. A first model has been developed in 2008-09 by Lieutenant Colonel Renaud François. It is work in progress requiring much more work and thinking, in particular to develop transnational indicators that can go beyond national data, practically the only kind of data available at the moment. Nevertheless, it is the first indicator for world governance ever developed to date. With time, the World Governance Index (WGI) can become an incontrovertible standard in this field.

4. Multi-stakeholder forums articulated with the different industries: the keystone of an effective world governance

This idea is drawn from the Proposal Paper on the banana trade (writing in progress). It is also present in the Proposal Paper on Amazonia. Among the many different kinds of forum, multi-stakeholder forums, which group together all the actors in an industry or trade, represent a promising innovation. Iain Farquhar, the author of the Proposal Paper on world governance of the banana trade, clearly raises the question: Can a multi-stakeholder forum lead to an effective world-governance system? The advantage of considering this form of organization is that it makes it possible to go beyond the purely territorial framework. Though it reinforces the actors’ territorial basis, it is also positioned in the overall framework of the trade and cuts across territories because it features the actors where they are. The twofold territory-forum articulation can constitute a true keystone of the new architecture for which we are drawing up the blueprint.

Various meetings and Proposal Papers—in the South Cone of America, Lebanon, South Africa, and China, on the governance of water and on controlling the violence of war in a globalized world—have brought up a theme that cannot be ignored when wanting to change things, starting with mentalities and attitudes with regard to “Others”: the theme of ressentiment.

Ressentiment abounds in many regions: between Algerians and the French, between the Chinese and the Japanese, between Palestinians and Israelis, between Rwandans and the Congolese, between Latin Americans and Americans from the USA, between Georgians and Russians… In the South Cone of America, there is a lingering ressentiment in particular among Chileans, Bolivians, and Peruvians. Ressentiment is not restricted to feelings between countries, it is also found within every territory, especially between the rich and the poor, and between nationals and foreigners, particularly where migrants are concerned.

In addition, thinking about ressentiment makes it possible to interrelate the individual and the collective. Ressentiment is comprehensive, it has to do with groups and peoples but is also of every individual’s private domain. Thinking about it and overcoming it therefore constitute a way of making progress toward personal and collective transformation, definitely one of the central pillars of the ethical and political change that new world governance calls for.

Like for any question related to world governance, the problem of ressentiment is complex. It requires an overall approach to try to grasp the phenomenon as a whole, but should also make it possible to deal with each specific case. The proven techniques of conflict prevention and resolution constitute an important approach in this area. But they still need to be implemented, which implies finding the will, and the means, to do so. Ideally, this requires setting up continuous dialog, as ressentiment is often fed by misunderstandings.

At a higher level, it is also about renewing every individual and every community’s identity. Ressentiment is an aggressive act of memory, often buried in a distant past projecting markers founded on a badly assimilated history of misunderstandings. The nationalistic ideology that has guided states’ policies for centuries has had, from this point of view, a particularly harmful effect, as it has exacerbated ressentiment between peoples without, for all that, diminishing intranational resentment. For this reason, the erosion of national borders and the recent awareness of the place of human beings in their environment have contributed to redefining everyone’s identity in a world that, in a certain way, seems less fragmented, even though new divides are emerging, which could, if we’re not careful, feed old resentments and generate new ones.