FASE’s Commitment to a Sustainable and Democratic Amazonia 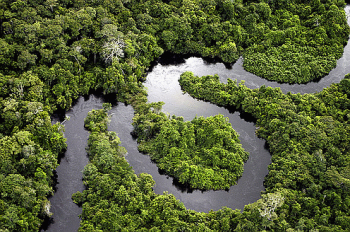 This text systematizes the FASE experience while operating in Amazonia and aims to contribute to the debate and to the diagnosis, views, and collective proposals of sustainable and democratic alternatives for the region, together with FASE’s partners.
The purpose of this document is to analyze the future of Amazonia as a national and international challenge, the political debate over the destiny of this Region and the big issues and arguments facing its development. It introduces also the contribution and the proposals of FASE (Federação de Órgãos para Assistência Social e Educacional – Federation of Organizations for Social and Educational Assistance) a NGO founded in 1961 working in all Brazil for Local, Communitarian and Associative Development.

Around Amazonia's destiny one of the most important battles among the rich countries and the countries of the south is being waged, in a war that will decide where the burden will fall for each country, in the inevitable allocation of the costs of the environmental crisis and the catastrophic changes in the world’s climate. Brazil, considered to be the fifth largest global emitter of carbon dioxide due to deforestation, went back to being the target of international criticism coming from those who think that the country is not putting forth enough effort to guarantee the preservation of Amazonia. Meanwhile, here in Brazil, those defending Amazonia's development at any price are not ashamed to use arguments such as to say that the rich countries have already destroyed their forests and now want to stop Brazil from doing the same in order to become a developed country.

The recently launched Accelerated Growth Plan (PAC) represents a move away from the neoliberal position of denying the role of the Government in the economy. With the PAC, the "invisible hand of the market" will be substituted for the "visible hand of the Government," which will once again have a decisive role "in planning, in defining priorities, and in articulating private and public sectors." Altogether, with the other large investments in Amazonian infrastructure on the horizon, it is clear that, in the PAC, some of the main issues regarding the development model for the region are condensed. Among these is the creation of three projects of high socio-environmental impact like hydroelectric plants, and paving of highways in order to satisfy the big producers’ needs.

In face of the multinationals interests, the supposed national-developmentalists continue to defend energy intensive projects of commodities production which neither protect the environment nor the most vulnerable segments of the population like the indigenous, farmers and peasant populations.

Several decades of background work on Amazonia gives FASE the responsibility of offering its experience to a greater project, in the framework of an organized network of Amazonian civil society. The fight for a sustainable and democratic Amazonia that shows solidarity, already counts among its forces a wide variety of social movements, associations, cooperatives, and civil society organizations. FASE’s commitments concerns the struggle for Agrarian Reform and land regularization, the struggle for Urban Reform, the guarantee of Food Security, the extension of Fair Trade and Solidarity activities, sustainable Consumption and consolidation of agro-ecology.