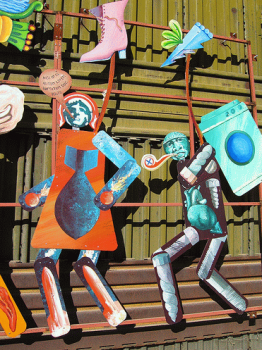 National borders have drawn up anti-democratic conditions from a partial, limited, unreal democracy, obtained within the framework of some nations. The author has concentrated on these problems, sketching the possible course of the current potential violence through border, towards the concept of a democratization of these institutions, without which any project for creating a new citizenship in Europe would be contradictory and incomplete.
What is a border? This question is old and new at the same time, and has no simple response. In the case of the modern European states, one can see the conceptual, legal and technical difference between the frontiers of a 15th century monarchy in the era of foundation and the so-called European balance, of the community borders instigated by European treaties, first in Rome later strengthened by the Schengen and Dublin agreements. We also know that the border itself can be multiple; it is not the same process crossing a border on an American passport as on a passport from the Balkan states.

The author claims that the fundamental challenge for any project of new citizenship in the era of economic trans-nationalization, of communications and culture, is to propose political projects and initiatives which tackle this new, violent complexity, as any attempt to re-create a “Leviathan”, a single central authority sacred under law and armed with the monopoly of legalised violence, has only served to cause the very opposite: widespread anarchy at world level.

The different types of border institutions have given the border the opportunity of multiplicity of national institutions, as the border is defined as a simplifying invention. The consequence of this has been the following contradiction: inside borders a certain amounts of democracy could be achieved, as a result of fights, movements, negotiations, and historical commitments. But borders were still in themselves utterly anti-democratic institutions which escaped any form of collective control, political practice, or form of negotiation.