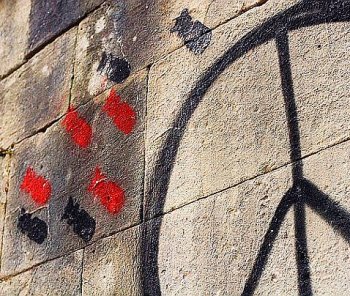 Are the NATO bombings in Libya justified? This intervention, meant to help rebel troops advance and to neutralize Gaddafi and allegedly seeking to minimize civilian deaths, is producing the very opposite of the hoped-for effect by prolonging the war indefinitely.

Once again, society is forced to make an unhappy choice between two evils: all-too-real national dictatorships, and Atlanticist interventionism (as well as possible future interventionism from other powers).

When will we finally see regional and international rapid intervention forces that are not conditioned by the economic interests of the countries that provide them? Or effective international legislation to clamp down on governments that do not respect human rights? Or pacifist and humanist ethics of war that could provide the basis for military codes in every country? How can we prevent society having to choose, yet again, between two evils, whether it be in Syria, Yemen or elsewhere?

In response to the violent excesses caused by the 2011 revolutionary uprisings in certain countries, we have brought together a number of proposals and reflections on conflict resolution, the ethics of war and the current geopolitical situation. Tarak Barkawi starts by reminding us of the enduringly tendentious nature of world governance institutions, particularly the International Criminal Court (ICC). The supremacy of Western interests within these institutions deprives their actions of all legitimacy and erodes trust in them by other areas of the world.

Margaux Vulliod offers an exploration of ressentiment, the driving force behind most armed conflicts. The author puts forwards a number of proposals to disarm ressentiment, including public recognition, righting wrongs and the need to develop political ethics. According to the Iquique seminar on the concept of ressentiment, as summarized by the FnWG team, this new ethical system should be rooted in the following premise: as human beings, we are all part of the same universe, we are interconnected, we must stop seeing the Other as different (because of his/her culture, geographical situation, religion, sex, age, etc.), as an enemy, as inferior or a threat. The authors provide a series of proposals in a variety of spheres including ethics, politics, the need for dialogue, territory, the capacity to gather together in assemblies and regional integration.

Jean-René Bachelet has drawn up a series of proposals for rethinking interventionism and military action, ranging from international coordination between the legitimate actors in a fairer world governance to the creation of pacifist and humanist military codes and a permanent international force. But where can these changes come from? Possibly from one of the system's ideological cores; young Americans are opposing their country's military interventionism by taking part in campaigns to denounce army recruitment in the suburbs and universities, as 15-year-old Karlee explains.

The laws of war were designed for traditional conflicts between European standing armies, not insurgencies. Lately, the West and the UN have been using force to "protect civilians". One might say they are using "human shields" as cover for military intervention. The idea of a "civilian" depends on an association between innocence and the non-combatant (...) read more (source: Aljazeera)

vulliod[Ressentiment and the new world governance: a general analysis

Ressentiment can be traced back through history, metamorphosing to reflect changes in the way humans organize society and affecting everything from conflicts to power structures. A phenomenon that is both individual and collective, ressentiment can oppose people and civilizations. We will therefore use the light shed by history to examine contexts favorable to the development of ressentiment (...) read more

Broaching the question of ressentiment is complicated, since it often gives rise to misunderstandings and stirs up confused and contradictory feelings. In this Seminar we decided to tackle the issue of ressentiment by broaching frequently avoided questions concerning relations between a country and its people. (...) read more

The most serious of all the dangers facing humanity at the outset of the 21st century is undoubtedly that which threatens its very survival. Since the end of the 20th century, we have entered into a transitional phase, with one crisis succeeding and overlapping the next: the financial crisis and accompanying economic crisis, affecting entire swathes of the banking and industrial systems (...) read more

There is an epidemic sweeping through American high schools. Youth sign up for the military by the 1000s, feeling some sort of obligation to serve their country. 9/11 often serves as a means and justification for this feeling. We don’t have any obligation to fight in wars that began when we could barely grasp the meaning of such an act using tactics so monstrous that millions of innocent people have died. The only obligation we have is to the future of humanity (...) Read more