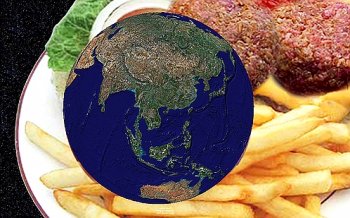 The Center for Science in the Public Interest (CSPI) a non-profit consumer advocacy group is collaborating with the World Health Organization (WHO) and the Food and Agriculture Organization (FAO) to organize an international meeting of consumer and public health groups from around the world to develop a common vision of food safety. This project is called Safe Food International (SFI).

With the globalization of the world's food supply, food contamination knows no borders. Due to innovations in transportation and refrigeration, food is rapidly moved across countries and between continents. While consumers benefit from having access to fresh affordable food from all parts of the world, the risks are growing. Food contamination that originates in one area is distributed widely and can cause illness in large numbers of people in distant places. Globalization of the world's food supply also increases the risks of intentional contamination.

In both developing and developed countries, increasing consumers' protections from both intentional and unintentional contamination of the food supply will require improvements in many existing systems. It makes little difference whether those changes come about in response to terrorist concerns or as a general effort to modernize food safety control services. Improvements in such areas as outbreak response and investigation will result in many immediate benefits for consumers. Strong inspection systems also serve to prevent and deter many food safety problems.

A number of trend has been identified by CSPI. First, many outbreaks are occurring from foods, such as meat, seafood, produce, eggs and poultry, that are widely traded on the world markets. Second, a single contamination point in a production chain can cause hundreds or even thousands of people to become ill. Examples of outbreaks caused by intentional contamination illustrate the ease with which food could be used for terrorist purposes. Food is also an obvious target for food scares. The extent of globalization of the food industry makes necessary to face properly eventual disasters through quick, efficient, and comprehensive actions involving both governmental and non-governmental levels. Furthermore, such actions must be coordinated and standardized so that appropriate authorities in each region can apply compatible methods to contain the risk and prevent the spread of disease to large numbers of consumers. Without a unified approach, we increase the risk for serious food-related outbreaks in the event of intentional or unintentional contamination of our food supply.