Assemblies emerging in Turkey: a lesson in democracy 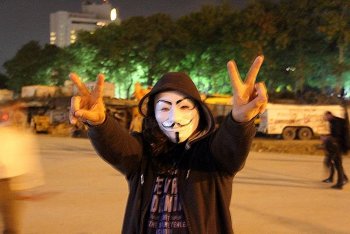 Something quite amazing happened in Turkey during the months of May to September 2013. In addition to the silent “standing man” actions around the country, people’s assemblies emerged in different neighborhoods across the city. As in Spain, Greece and the Occupy encampments before, the protesters in Turkey counter-posed their own form of direct democracy to the shame of a democracy proposed by Erdogan’s authoritarian neoliberal state. If there was ever any doubt, this shows how deeply intertwined the global struggles truly are.

The protesters are starting to counter-pose their own direct democracy to the sham of a
democracy proposed by Erdogan’s authoritarian neoliberal state.

Something quite amazing is happening in Istanbul. In addition to the silent “standing man”
actions around the country, people’s assemblies are slowly starting to emerge in different
neighborhoods across the city. As in Spain, Greece and the Occupy encampments before, the
protesters in Turkey are starting to counter-pose their own form of direct democracy to the
sham of a democracy proposed by Erdogan’s authoritarian neoliberal state. If there was ever
any doubt, this shows how deeply intertwined the global struggles truly are.

As the state launches its merciless witch hunt on protesters, activists and Tweeters, thousands
of people are starting to gather in dignity in various public spaces. As Oscar ten Houten
reports from on the ground in Istanbul, the Be?ikta? Assembly in Abbasaga park, which has
been going on for days, tripled its number of participants on Tuesday night, with a total of ten
popular assemblies taking place in Istanbul alone and at least one more in Izmir. As Oscar
writes on his great blog

These meetings have nothing to do with Taksim Solidarity any more. They are spontaneous
initiatives by local people who are fed up with Erdogan’s disregard for the Turkish citizens,
their rights and freedoms, their history, beliefs and traditions. … We arrive in Kad?köy, and
truly, I couldn’t believe this was happening. Well over two thousand people were gathered on
the green, to express their anger with the government’s eviction of Gezi, and to share their
hope for a better Turkey. Like anywhere else, it was a cross section of the population, which
included all races and creeds.

Interestingly, the members of the popular assemblies in Turkey use the same hand-signs as
the indignados, indicating that some of the methods were directly inspired by the real
democracy protests in Spain. This, in turn, seems to confirm the idea we raised very early on
in the Turkish uprising, and a claim that many Turkish activists have been making from the
very start: namely that this movement is not just a local or national protest, but part of a
global struggle against the subverted nature of representative capitalist democracy and for
real democracy and total liberation.

What, then, is real democracy? Obviously it’s difficult to have a straightforward answer to
such a complex question, seeing that different people will interpret the idea (and the idela) differently. It is quite easy, however, to identify what it is not. Democracy stands for the rule
of the people. As a result, when corporate interests and religious delusions begin to dominate
government, that is not democracy. In fact, when a small elite of elected politicians is
delegated to speak on behalf of the rest, that is not the rule of the people but their
representation.

The worldwide experiments with direct democracy — in the form of horizontal self-organization
through popular assemblies, decentralized mutual aid networks, thematic
working groups, and so on — provide a glimpse of what another world could look like. Of
course, none of this is to say that the protesters have a blueprint in hand for the ideal
revolutionary society; but they are actively testing and trying out different models to see how
large groups of people can effectively organize themselves without hierarchical and
centralized leadership.

Last year, when shooting our first ROAR documentary – Utopia on the Horizon – in Athens,
we interviewed Manolis Glezos, the 90-year-old Greek WWII resistance hero who is
currently an MP for the coalition of the radical left. Glezos experimented with direct
democracy when he was the mayor of a village on the island of Naxos. Even though Glezos
still believes that a parliament controlled by popular forces can help activists on the ground,
he insists that the citizens’ revolution as such cannot proceed if the people do not organize
themselves from below.

So what about the popular assemblies in Syntagma Square, Puerta del Sol and Zuccotti Park?
Was that real democracy? When we asked Glezos, he looked at us with an amused smile on
his face, and — to our great surprise — just said: “No. This is not democracy. How can a few
thousand people assembled in a square claim to speak on behalf of the millions that live in
the region? This is not democracy — it’s a lesson in democracy. If this movement wants to
survive, its direct democratic models will need to spread to the neighborhoods and to the
working places. Only then will we start seeing the emergence of a genuinely democratic
society.”

What Glezos is saying, in other words, is that for direct democracy to work, the assemblies
need to be radicalized and extended into the working places in the form of workers’ selfmanagement, as in the inspiring case of the Vio.Me factory in Greece. Obviously, none of
this will be enough to overthrow the capitalist state as such; but it is a starting point to help
engage people in different forms of decision-making, different forms of production, and
different ways of being, thinking and interacting. In a word, it is about building the social
foundations of self-organization that will allow us to replace the oppressive institutions of the
capitalist state when the time comes.

But there is something more. The direct democracy of the squares is also about saying that
we cannot wait for some distant revolution to overthrow the capitalist system. We are
currently facing a global humanitarian tragedy, an ecological disaster and a profound social
and political crisis. We have to act now. We cannot rely on corporate elites to do this for us.
We cannot trust in political representatives to take the process ahead. The only ones we can
trust are ourselves. We, the people, will have to carry this revolution forward. Starting now.

Still, on a more humble level — yet perhaps the most important of all — we should be
careful not to fetishize direct democracy. At the end of the day, the assembly is a very simple
phenomenon: it is about ordinary people craving to be heard and to have a say in their lives.
Assemblies are a way to allow those who have been shut up for years to finally stand up in
dignity and to speak their voice — and be heard. It is about recovering our collective sense of
humanity from the rapacious claws and unrepresentive institutions of the capitalist state.

As such, the assemblies are a beautiful and crucial form of social engagement and political
participation. In the future, they may well be expanded to cover more and more segments of
the population. But even in these moments of elation, when we see the people taking matters
into their own hands and enacting real democracy in the places where they live and work, we
should stay realistic: this is only just the beginning. The capitalist state survives, and creating
our own parallel society is not enough. We must self-organize, and then push our quest for
autonomy outwards to eventually encapsulate all of society.

Luckily, there is hope that such radical aspirations may not just be a pipe dream. In a sign that
this leaderless movement is already deregulating the violent flow of authority unleashed by
the Turkish state, the increasingly desperate government is doubling down on the repression,
arresting random people who were sighted at the protests or who sent out “provocative”
Tweets, and even threatening to send in the army. As Oscar puts it, “the authorities still don’t
understand what’s happening. They look for leaders, people to corrupt or to eliminate. But
there are none. We are not an organisation, we are a world wide web. We are the people on
the threshold of changing times.”