After Copenhagen, Some Light on the HorizonHenceforth, the Keys to the Future are Responsibility, Solidarity, and Courage 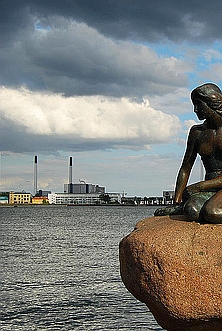 What climate warming does is expose the ineptitude of our world-governance system in broad daylight, where Copenhagen was no more than a theatrical production, making us forget a truth, albeit blatant, which is that “world governance” remains fatally attached to the old principles of international relations that have been in force for centuries and, despite their being totally inadequate for our current context, are still governing the world today.

2009 is over, and here we are in 2010: it’s been ten years since “Y2K,” and they went by in a flash. Millennium doomsayers may have had to wait a whole decade, but most likely, they are not disappointed: the threats weighing on the planet in 2010 certainly seem more serious for the survival of humankind than the so-called “Y2K bug.” Shortly after the Y2K computer threat, Osama Bin Laden and his henchmen offered us a serious wave of panic in 2001. Nonetheless, the great Twenty-first Century Threat never materialized: so it goes with terrorist bangs. After ten years’ worth of stalking, sporadic attacks, and two stupid and deadly wars launched by one of the most ham-fisted heads of state of the time, Bin Laden has remained unfindable. All the same, he will remain in history as the author of the most memorable attack of all times, an attack that will probably be written into history as the symbol of the ultimate decline of Western supremacy, with the United States as its last standard bearer. As for the rest, Al-Qaeda’s striking force today is seriously reduced, as attested by the recent Christmas Day foul-up of an amateur (though “connected” to Al-Qaeda) terrorist on an Amsterdam-Detroit flight. A very far cry from the mass-destruction hyper-terrorism profusely predicted by post-9/11 anguish mongers.

On the same subject, mass destruction, neither has proliferation made the threat of a nuclear cataclysm play out ... fortunately. States still have the monopoly on atomic weapons, and even those states playing troublemaker remain “rational actors,” as the saying goes among political scientists. More of a threat was the 2008/09 economic crisis, especially, as usual, for the weakest, with a 100 million-strong new-poor contingent having joined the old-poor ranks. Regardless, the scale of the crisis did not have the expected disastrous consequences on overall geopolitical stability and, so far, we are still a long way from 1929, the Depression, and the dark years that followed in its wake. The crisis has confirmed what we already knew: that the small world of finance is pathologically greedy and selfish. With all due respect to Adam Smith, who was Chair of Moral Philosophy before he became an economist, it appears that the greed of financiers has not even had the positive effects on society that the greed of 18th- and 19th-century industrialists sometimes generated. Well, economics is called the “dismal science,” as it certainly deserves to be!

This leaves the latest “great threat” of the moment: climate warming. As with the other threats, we are also sailing in the fog, caught between doomsayers and fundamentalist ecologists on the one hand, and narrow-minded or foolhardy, blind, and unremitting skeptics on the other. At an age where truth is expected to be underpinned with scientific “proof,” the climate-warming theme is stuck in a tug-of-war between convinced scientists who cannot provide real proof and those for whom absence of proof means absence of climate warming. As usual, common sense gives us a clearer picture: warming there is, probably due to a combination of human and natural causes, with serious medium- and long-term consequences, however difficult to evaluate for scope and time frame.

Unfortunately, we are not at all well-equipped to react to all these threats and even less so to avert them, especially the climate-warming threat, infinitely more complex than those linked to terrorism or nuclear proliferation, where after all, states do have some influence, should they be somewhat willing. What climate warming does is expose the ineptitude of our world-governance system in broad daylight, where Copenhagen was no more than a theatrical production, with the classic unity of time, place, and action (in this case, absence of action) trilogy, of this state of affairs with a tragic and at the same time completely predictable epilogue.

The surprise, if any at all, is that the outcome should have been surprising. In fact, the dog-and-pony show in Copenhagen could only end in failure, no matter how great the expectations generated before and during the event. During the conference, the media and observers fixated for the most part on the nature of the various and sundry discussions, speeches, and talks, especially those given by the best-known characters: Sarkozy, Merkel, Brown, Obama—this latter expected on the last day like a Messiah—or on the currently most high-profile nations: China, India, Brazil, and Russia. As if, at the end of the day, the outcome and consequences of the conference depended on everyone’s willingness to agree and reach a sustainable and binding agreement; or that they would match the outstanding efforts put in to prepare the conference; or that the scope of the problem would “bring everyone around.”

But politics has its reasons, which reason does not always know. Because all this production was making us forget a truth, albeit a flagrant one, which is that “world governance” remains fatally attached to the old principles of international relations that have been in force for centuries and, despite their total inadequacy for our current context, are those that still govern the world today. The principle of “national interest”—also founded on greed and selfishness—, the inviolability of national sovereignty, the perverse and cynical power-struggle interplay among nations, the determination of political régimes to maintain and reinforce their power at home: all these factors give power play within and among states much greater weight than “the future of the planet,” a future that depends on a radically different time-space than the one our political leaders are living in. So it was for the Chinese leaders, who, empowered by the rise of China, did not hesitate to oppose the various proposals put to the floor, especially when these might possibly have undermined their power, which remains, we tend to forget, absolute. So for the unofficial “president of the world” Obama, garlanded with his brand new Nobel Peace Prize and probably aware of the stakes, but locked into his petty domestic-policy dealings with the US Congress. So for the UN, incapable as ever of weighing on the event, then sinking into pathos with the Secretary General’s angry post-Copenhagen outburst, delivered while wallowing in his own helplessness. So for Europe, paralyzed as ever and inexistent from the moment that the stakes require a little bit of courage and cohesion.

This predictable failure may however have a redeeming effect, for although the environmental threat linked to climate warming could not find a solution in Copenhagen, the failure of the conference is not as disastrous as has been said. Expectations should in fact have been much more modest than they were.

It now remains to draw lessons from Copenhagen. This is the most important challenge. But let it be repeated: this type of “solution” will systematically lead to failure. To face the problem, it is imperative that how it is approached be reviewed in depth. It is obvious that states and their representatives will never reach a satisfactory agreement and even less pull off its effective implementation, should an agreement even be reached.

Historically, political progress has been accomplished through a gradual inversion of the march of power, where the pressure initially wielded exclusively from the top of the pyramid down was partly combined with an upward push from the bottom: this is how, for instance, the state has been democratized. Democratization has never been truly propagated internationally, however, be it within states themselves or regarding participation within extra- or trans-state entities. In this sense, the G20 and the UN are semblances of progress, but they still reflect the rigid hierarchy of power and the correlation of forces, and in any case, sanction the idea according to which when it comes to making major decisions affecting the world, the only legitimate actors are states. Yet to progress, the indispensable and unavoidable democratization of “the international” necessarily requires the participation of local, regional, or trans-national actors; such actors, sometimes better than any state apparatus, will know how to defend the interests of peoples at an age where the notion of border is crumbling, and with it, the notion that national interests prevail over all. The democratic process is synonymous with checks and balances of power. Why, then, should we still be asking more from governments? Implementing a world-governance system worthy of its name does not mean that states should have a greater influence over our destiny, and even less that a super almighty world government should be set up. On the contrary, it is the manifestation of the multiplication and re-balancing of decision centers.

At the very least, the mechanisms of world governance need to be reviewed so that we can finally truly face the global problems—and climate warming is not the only, and definitely not the last threat to the future of our planet. May Copenhagen serve to spark off the development of such a system, so that a single branch of power, the sovereign national state, is no longer the single actor in world governance, and so that the way the correlation of forces plays out stops guiding decision makers’ actions, especially when the challenges lie beyond the narrow framework of such dealings! Just as the Enlightenment bequeathed us the tripartite system in which checks and balances are at work within nations, today we must do everything to bring about the emergence of a system where new stakeholders—civil society, NGOs, IGOs, transnational parliaments, international collegiums, etc.—can also weigh on the major decisions of the moment. The actors are here. Let us set up new rules of the game so that they can enter into action. The stakes are here. They are enormous. Selfishness, greed, and will to power are still the world’s keys. But the gateway to the future has changed. Henceforth, the keys to the future are responsibility, solidarity, and courage.